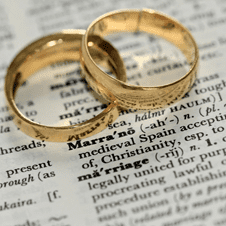 This article deals with the issue of the choice of law ruling the economic relationship between foreign married couples resident in Italy.

Concerning the economic relationship between married couples, if they have the same nationality, the national law of the two partners will be applicable.

Where spouses have two different nationalities, the law of the State where the marriage took place will be applicable.

Decisions regarding matrimonial regimes can play a key role in the event of divorce or death and can therefore have important and far-reaching consequences.

Pursuant to article 159 of the Italian Civil Code, in the absence of a written agreement between spouses, the default matrimonial regime will be deemed as that of a community of property.

Assets included in a community of property regime are:

How do Italian matrimonial regimes impact the purchase of real estate property in Italy?

Under the community of property regime, the general principle is that if a married couple buys a property, it belongs to both spouses in equal parts.

If, however, the couple opts, through a written agreement, that their matrimonial regime should be governed under separation of property, it is possible to register a property in the name of just one spouse.

The choice of the regime of separation of property may be made ​​by a couple prior to, at the time of, or after their marriage. So foreign nationals married elsewhere, but resident in Italy can decide at any time during their marriage to elect to have their economic relationship governed by Italian law.

If foreign married couples resident in Italy do decide to regulate economic affairs according to Italian law, they will have to do it through a written agreement in the form of a public deed in the presence of an Italian public notary.

There is a great deal to consider when deciding whether or not marriage should be governed by Italian law and which matrimonial regime should be chosen. Each case will be determined by individual circumstances. You should seek professional legal advice before making a decision.

You may also be interested in Cross Border Property rules: Marriages & Partnerships

How is Italian inheritance regulated?
Cross-Border Inheritance Law (Brussel IV)
What Is The Role of An Executor of An Italian Will?
Farewell to The Certificate of Habitability?
Italian Inheritance. Why draft an Italian Will?
Dormant current accounts: how to proceed?
0 replies

EU Succession Regulation: European Certificate of Succession What is the role of Italian Probate Solicitors?
Scroll to top